If you've been coming to visit me here at Adventures in Integration over the last three years, you'd have noticed that it has been a bit dead here lately.  I thought I'd better pop by myself and offer an explanation.

Time.  Pure and simple.  I don't have much of it left over once I've been to work, looked after my daughter, had dinner and spent the evening working on my side project; my crochet business MissNeriss.  Blogging isn't the only aspect of life that has fallen by the wayside, you should see the state of my house.  Not great.

A lot of the "spare" time I do have is spent trying to figure out the balance between work and family, and to try and work on my own health and self esteem.  I've started doing yoga at home, which is actually helping me a lot.  The quiet brings a lot of clarity and calm.  God, doesn't that sound wanky.  But it's true.  It's good for soul searching.  When I'm not collapsing from trying to hold some sort of reverse plank position!

So, something has to give and unfortunately, this is it.  I'm going to be away from this page for a while.  I'm not sure how long.  Hopefully not permanently, because this place has brought me so much joy and so many lasting friendships, both online and in real life.  But let us say that you won't find me here again this year.  When it comes to resolution time in January, I'll see how I'm going, and if the ideas that are bursting out of me actually make it onto the page.

Until then, let's stay in touch.  You can always get me via Facebook, and you can come join me at missneriss.com and check out the adorable creations that have been taking all my time... 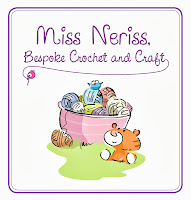 I'd been to Bruges before.  One afternoon, on a Sunday back in 2008.  We had planned to go to Antwerpen, only to find that it was a car-free day and nothing was open, so decided to go on to Bruges for a bit of a look.  And wow!  It was one of the most beautiful cities in all of Europe.

So, when the opportunity came up to return this last weekend I jumped at it.  Carly (my first friend in Holland) had booked tickets to see Cats, the musical, in Oostende and someone had cancelled and she had a spare ticket.  I'd never seen Cats, so thought, why not?

We arrived in Bruges and the weather was gorgeous.  Absolutely glorious.  We were coming off the back of some of the hottest days of the year and the cool change was just arriving which was fabulous (although no complaints about the hot weather, it was amazing!).

Our first stop was the square, of course.  We decided to grab dinner there and soak up the atmosphere while doing a bit of people watching.  Until the bill arrived.  96 euros for three mains and two rounds of drinks for the three of us was a bit of a rude shock!  But, we reasoned that this was a one-off and we should just enjoy the perfect weather and gezelligheid.

Saturday was spent cruising the city and the multitude of chocolateries.  There's one thing that Bruges will never run out of, and that's chocolate.  And horse-drawn carriages.  The city was absolutely heaving, but to be honest, I didn't really notice it.  Usually I hate crowds, but it really wasn't a problem.  I think I was just enjoying my break so much that I could have been anywhere!


In the evening we headed over to Oostende to see Cats, and the city was a huge surprise.  I was expecting a bit of a dump of a town to be honest, not the Belgian Benidorm!  High-rise apartments line the beach for miles and the promenade was bustling with people enjoying the late afternoon sunshine.  It was lovely.

And the musical.  What can I say?  Meh.  It didn't excite me.  I enjoyed it, but I wouldn't rave about it and my life isn't richer for having seen it.  I don't get the hype.

What I was excited about though was the famous Bruges Belfry.  On the Saturday I looked at it and thought to myself: I should climb that.  I had a quick look at the entry and saw people lined up to climb and decided then and there that I wouldn't be joining that queue.  Instead I planned to come back as soon as it opened the next day and avoid the masses.

And I'm so glad that I did!  I was one of the first to the top and the view was spectacular!


The absolute best part of getting up early to climb the Belfry was that nobody else had the same idea.  I walked the streets of Bruges from 8 am and the city was practically deserted.  Quiet and still, it gave me a whole other level of appreciation for the place.  Sunday morning is my favourite time to really explore a city, while it's still sleeping.  Especially in summer and with gorgeous weather.


My top tips for visiting Bruges:
Avoid eating on the main square if you are on a budget.  Yes, the atmosphere is amazing, but the food is overpriced and average at best.  Explore first, you'll find a multitude of lovely restaurants and cafes within a stones throw of the Belfry.

Take a canal cruise.  While the canals are not as extensive as Amsterdam and it's only about a half hour trip, the city of Bruges is Unesco listed and there is some seriously impressive architecture to be seen, including the 100+ metre high cathedral which is made entirely of bricks instead of stone.

Eat chocolate!  It doesn't matter where really.  I know that not all chocolate shops were created equal, but in Belgium you'll have to try very hard to find a bad one!

Try a trappist beer.  There are literally hundreds to choose from, but be careful: some of them are so strong they're likely to blow your socks off!

Take the time to visit Oostende if the weather is good and time allows.  The promenade is well worth a stroll.  The beach is lovely and there's plenty of space.


I love Bruges.  I still want to return in the winter, I think it will be a spectacular cold, Christmas city.  Have you been?  What did you think?

Why is it so hard to make friends with other mamas?

Seriously.  Raina has been going to day care since she was ten weeks old and the only other parent I am friends with is a woman I knew already, as she's another foreigner (and awesome).

Why is it?  I just haven't been able to break in.  I've had a friendly chat with one mother whom I ran into at the health centre one day when Raina was in for her monthly check up, but I've never seen her again.  The mothers I do see regularly completely blank me.  Really.  None of my attempts even gain eye contact.  One of the little boys opened the door for me once and his mother proceeded to give him the bollocking of a life time for opening the door for strangers.  Fair enough, but I'm not a stranger.  I see her little boy three days a week.  We chat together and he plays with Raina all day long.  I'm not a stranger to the mother either.  I've seen her three times a week for a year.  But she's never once acknowledged me.  I must have committed some crime on the very first day that she hasn't forgotten.

I've had people let the door slam in my face, ignore me and then if they do talk, it's just to be patronising.For example:
Her:  "Oh wat een bos haar heb je," (what a lot of hair you have) to Raina
Me:  "Ja, sinds ze geboren was," (yeah, ever since she was born) with a big grin, thinking finally!  I can engage with someone.
Her: "Tjsa.  Dat weet ik,"  (like, yeah, whatever.  I know that.) in a sarcastic way, not looking at me, then turning away.

It has taken me right back to the very early days when I first arrived in Holland.  Except now I do know the language and I'm not afraid to communicate in it.  These women seem to know all about me; where I come from, that we went on holiday to Australia for a month over Christmas, but I know zero about any of them.

One of the first things we learn in Inburgering is "Je moet altijd een hand geven," or, you must always offer to shake hands when you meet someone new.  Not one parent has offered their hand to me and yes, of course I could be offering my own hand, but that's difficult when eye contact isn't even possible.  I'm the first to admit that although I'm not great at making new friends and approaching new people, I'd love to be able to make friends with some of these parents.  Especially as our children are the same age and we live in the same area and are potential play-date material, but I feel as though it's too late.  The walls are already up.  And fortified.

I'm hoping it can be different once Raina turns two.  She'll be able to go to playgroup and parents are encouraged to hang around for a few minutes to interact.  I'd love to meet new people who share the same interests.  And by interests, I mean have kids.  At the weekend we went to a party for a friend's 40th (oh lord.  My friends are celebrating their 40ths.  Shit.) and it was wonderful.  He has a gorgeous daughter and their house is kid-proof!  We could just let Raina enjoy herself instead of stressing about her knocking over expensive statues or smearing the tv with her greasy fingers.  It was just about the best party I've ever been to.  Purely for that reason.  Well, the food was pretty fabulous too.  But I'm hoping that the playgroup will be a fresh start.  New people, new opportunities.  Maybe an invitation for coffee if I'm lucky.

Ultimately my point is, I want to have friends who live close by and have kids and I had always thought that I would find those friends via the day care because at the very least, we'd have kids the same age in common.  Instead I feel even more of an outsider.

How have you coped with making friends via kids and living in a foreign country?  I always hear that we must try harder to integrate and interact with the locals, but I don't know how I can break through.  Any advice for me?

And just because it's so cool, here's a photo of Raina getting creative with her dinner. 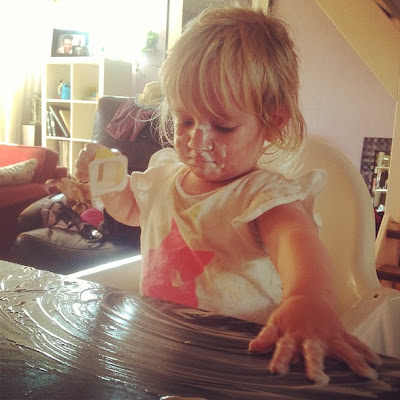