While Sydney was suiting up (or stripping off?) for Mardi Gras, we were partying in Maastricht at Carnaval, or Vastelaovend as it's known as down there.  We stayed with a couple of friends and we had an absolutely cracking time.

Maarten had bought us cow suit costumes from Maartkplats.nl (Dutch version of Ebay), and we were so chuffed with them.  Last year we went to Carnaval in Eindhoven and I just didn't really get the concept as it was my first time, so our costumes were absolute arse.  Maarten looked like the killer from any random slasher movie, and I just looked rubbish.  So, this year we wanted to at least have a good crack at a costume, and this was the end result: 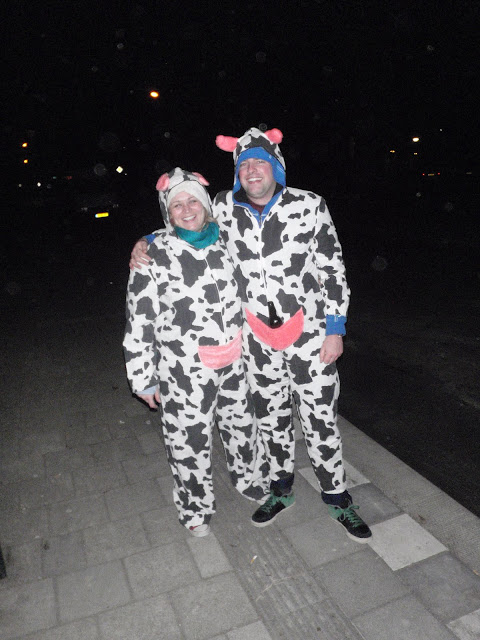 We went into town on Saturday night for a bit of pre-Carnaval action (as it doesn't officially start until Sunday in Maastricht) and had an amazing time.  The atmosphere was sensational.  Everyone was dressed up in their awesome costumes.  One of my faves was a group of KLM flight attendants and a couple of guy's wearing Snuggies with "Snug Me" on the front - awesome!
I had previously been a bit concerned at the trials of finding a toilet as this is one thing that is really not done well at large events in the Netherlands - female toilets practically don't exist!  At New Year's Eve a 2008/9 we were at the Dam Square in Amsterdam, and I kid you not, there was not one single toilet for women.  Not one.  Only men's urinals.  My friend Jess and I ended up going in a dark corner at the garden of the poshest hotel in town!  Rightly so I was a more than a little concerned that I wouldn't be able to get to a toilet, so Maarten got hold of a couple of TravelJohns just in case (the wonders of having a husband in Procurement!).  Luckily I didn't need to use one, because getting out of that cow costume was not fun: I could fight my way through the crowds to use the loos inside pubs thank goodness.  I'd stupidly forgotten to bring coins though, because you have to pay to go (that is one of the most bizarre things about this country I think and a whole other rant-y post for the future).  Trying to get to a toilet was also a bit of a mission because it was nothing to end up in the middle of a Polonaise Hollandaise (that's a Congo Line to you and me) on the way!
We tottered home at around 3 am to get a bit of sleep before getting up to do it all again, this time for the REAL Vastelaovend!  In Maastricht the parade isn't so regimented as in other places, meaning anyone can join.  If I wanted I could have walked to the back of the line and danced along with them.  We only saw a few really elaborate floats.  I'm not sure if we missed a lot, or if there just weren't that many to be honest as we weren't late for the parade. 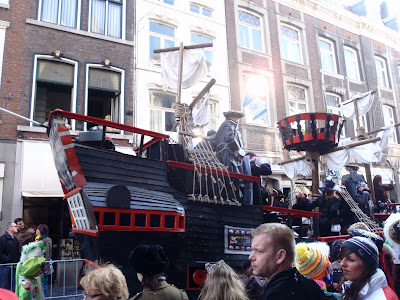 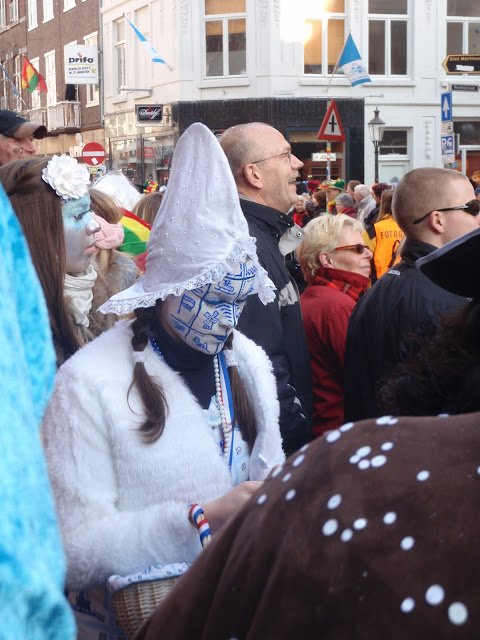 We left at the end of the parade to drive home.  We had initially thought to stay until Monday, but after the Saturday night, we knew we wouldn't be able to hack the pace.  Plus, it's a bloody long way to drive even without a hangover!
It was a wonderful weekend, and I'm already planning my costume for next year.  I'm thinking we'll have to try another city so we can try to experience the diversity - it's not the same everywhere.  Cologne, perhaps?  Obviously I only want to go to Germany for the sausage and schnitzel!
For a great overview and a list of do's and don'ts for Carnaval, head over to my new Twitter friend @windmilltales post on Tales from the Windmill Fields for everything you need to know for next year!
Posted by Unknown

Great story! We were about to go to Maastricht also but had to change plans. We went to Tilburg and Breda instead. Tilburg is really good to party and hang out, great people and costumes there! And not such a long drive. :)

Totally dig that a good 1/3 of this post was regarding dunnies! Sounds like so much fun - its a beautiful summers night here in Adelaide and the Fringe is on. In fact its Womadelaide weekend... you've almost inspired me to get my ass on my kitchen chair and go out. Almost!