Ah, Germany.  How I love thee.  Before I packed up and relocated to Europe, I swore black and blue that I would never go to Germany.  Why not? you ask.  Well, in my past life I worked as a tour guide based in Alice Springs (taking trips mostly between Uluru, Kings Canyon, the Flinders Ranges and Adelaide).  It was a job I absolutely loved.  I was fortunate enough to visit some of the most beautiful and ancient places in Australia once or twice a week, for which I am eternally grateful.  I also met hundreds of fantastic people; some of whom I still keep in contact with, and one of which I actually married!


Did I mention before that Maarten was a passenger on one of my tours?  Yep, he saw me at my absolute best - in my very feminine uniform of brown shorts, green shirt and hiking boots.  Covered in red dirt and a mouth like a rude version of Steve Irwin.  Cooking damper in a camp oven and rambling about rocks.  And he still managed to crawl into my swag on the last night of the trip expecting a bit of romance.  Obviously I should have realised then that he was the perfect man for me because the person I was in that place was exactly who I am.  With no pretenses, no makeup, it was me pure and simple.  I kind of miss that Nerissa.  Haven't seen her for a while.


But I'm wandering off track a bit here (I never seem to keep the one train of thought for very long).  Not only did I meet some wonderful people, I also met some shockers.  Among those shockers were English gap-year girls (horrible high maintenance daddy's girls looking for power points for their GHDs everywhere) and Germans.  We all know that Germans have a horrible reputation abroad as terribly behaved tourists.  And they didn't disappoint.  My worst passenger ever was a middle-aged German man who ruined an entire tour, made the group hate me and nearly made me quit the job.  One particular comment that has stayed with me was "When are we eating" (as a demand, not a question.  Nevermind that I'd just driven 700+km and taken them on a 6km hike).  But in hindsight, the Germans were never problem passengers aside from their general attitude, and of course it wasn't everybody - I met some wonderful Germans on tour, even got tattooed with one.  The were never late, and never whined (hello gap-year girls, I'm looking at you).

So, I'd sworn off Germany because I wasn't fond of the tourists I'd encountered.  Sweeping judgements abound.  However, I have seen the light, and am now a borderline evangelist for Germany.  Love it.  Love how it's such a beautiful country, love how everyone obeys the rules (we were told off for crossing the street on a red man), but most of all I love love LOVE the food!  I'm glad I don't live there because I would eat everything.  There's always a dilemma when I go to Germany - do I have the bratwurst or do I have the schnitzel.  When really in my head I'm wondering if I can have the schnitzel with a side of bratwurst.  And the bakeries!  Real buns and pastries, which is something that is very disappointing here in Holland.  No good bakeries.

In February we went to Berlin for a long weekend.  Everybody I know who has been absolutely loves Berlin, so I was very excited to go.  We had an amazing deal with EasyJet - we booked return flights for €85 for the two of us, and stayed in the EasyHotel for €75 for three nights.  The accommodation was fantastic - brand new, clean and cheaper than a hostel!

After a delay at Schipol we arrived at Berlin and caught the train into the city.  We took an S-bahn train, but I would recommend taking an RER - two and a half times as fast as the S-bahn and also lovely and quiet and clean.  The NS here in Holland can certainly use a few pointers from their German counterparts, that's for sure.

We bought a Berlin Welcome Card valid for three days, and that gave us unlimited public transport access in Berlin and Potsam.  Let me tell you, you really need the public transport in Berlin.  Unlike Amsterdam, it's just too massive to walk around and see all the sights!  Just be prepared to climb a lot of stairs.  And I mean a LOT.  Between the U-Bahn and the S-Bahn is what feels like about 4 stories, so it's a great workout.  Not so much fun with a belly full of schnitzel and sausage though...

We travelled all over the city.  On the first day we went to the Holocaust Memorial near the Brandenburg Tor.  What an eye-opener that was.  I couldn't read all of the stories, it was just too traumatic.  One room is devoted entirely to reading the names and a brief history of each known victim.  It was very confronting and brought home the devastation of 6 million murdered Jews.  Remembering and acknowledging past horrors is something that the Germans do very well.  I appreciate the way that the country does not shy away from its atrocities in the way that other countries do.  The German people are willing to stand up and recognise their past and use that to remind themselves and the world what can happen if we allow it.

On the first day when we were walking around (we walked from the Central station to the Brandenburg Tor to Potsdam Platz) I kept wondering about the wall.  Which side was I standing on, what did it look like, what it must have been like knowing that there was a different world right on the other side....  There is a whole restored portion near the Oostbahnhof that is covered in art.  It's awe-inspiring and worth it to walk the entire length.

Of course we also went to see Checkpoint Charlie.  I'm not sure what I was expecting, but it was a bit surreal to read the signs and see that just over there was a completely different country!  There is a museum right by the checkpoint filled with tales of daring escapes from the East.  One of my fabulous aunts told me that her sweetheart was posted in Berlin on the wall at Checkpoint Charlie, which I really didn't know.  He's one of these guys who keeps his cards quite close to his chest and you can know him for years and then have a good think about it and realise you hardly know him at all.  He's a highly decorated Vietnam Veteran and was the first Australian to be posted to West Germany since WWII.  Just between you and me, he's my real-life hero.  A few years ago I went to Gallipoli for the Anzac Day memorial service and he was kind enough to let me take some of his badges (not the medals of course), so I took him along with me in spirit.  I was so honoured. 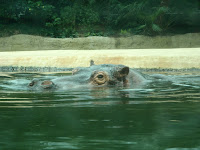 But back to Berlin.  One of the biggest highlights was going to the zoo.  Apparently it is the largest zoo in Europe, and it was just fantastic!  All of the outdoor enclosures are built around the animal's indoor houses, and you can go inside and see the animals up close!  I was thisclose to a lion and a rhino!  And we saw Knut the Polar Bear.  If you haven't heard of Knut, you have obviously been living in a (bear?) cave.  He is a polar bear that was rejected by his mother, so was raised by one of the zoo keepers.  He might actually be more famous than my twitter friend @mistershuffles (a baby elephant who zookeepers thought was dead when he was born at Taronga Zoo)!


On our last day we took the train out to Potsdam.  Maarten had heard that there were lots of castles (Castle Alert!), so thought I might enjoy it.  As it turns out the city is FILLED with castles!  There were a couple of homes of Frederick II of Prussia, who was one of the coolest emperors in history in my opinion.  Not only did he win the land version of the Seven Years War, he introduced the potato to Europe (he was sneaky enough to encourage his subjects to 'steal' the potatoes from his private garden) and he was such a strong commander that he is regarded as one of the best in history, up there with Napoleon and Charlemagne.  I absolutely loved seeing Potsdam.  I could go on and on all day about the castles and palaces, but I probably lost you at Castle Alert...

I really thought Berlin was an incredible city.  It was so easy to get around, and there were endless places to eat if you're on a shoestring like we always are.  The monuments are huge in scale, but beware:  you can't take a photo of anything without the bloody television tower in the background!

I think the biggest highlight was the zoo.  I loved that you could get so close to the animals and they all look so happy to be there, unlike Artis where you can just see that the elephants are very unhappy.  It's not a visually stunning city like Paris or Brussels, but there is so much going on that you it is impossible to run out of things to do and see.  Just don't forget to take your appetite with you, you're going to need it!
Posted by Unknown

Nice post. I think I should really visit Berlin one of these days. My March weekend trips are not filled yet. This is a good guide.

Hey glad to see that you are concentrating now on actually living the Dutch life (lots of travels) after passing the inburgering exam. Mine is coming in two months, yet I feel that Im not (or will never be) prepared.

Awesome post babe! Well, I'm about to book us a trip to Madrid for May, so you won't be short of material for the coming months ;-)

Great post, all info. duly noted ;) Haven't been to Berlin either - have been to Cologne and Düsseldorf instead and left Berlin on the waiting list... it sounds and looks wonderful. How lucky that you managed to find good deals for the flights and hotel!
I see that you are planning a trip to Madrid in May - if you need any pointers there, I'll be happy to give some to you this time!

I've not explored Germany much, I really should get around to it sometime soon. I love zoos, especially going to take photos. I'm going to make a point of going to the zoo in Berlin now, it sounds fantastic!

Great post, I absolutely love Berlin! Went there a few years ago and it really is one of the most amazing places I've been. Maybe I'll take my baby there someday too. :)